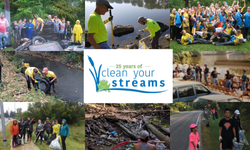 Three years later in 2000, there was a third Kickoff added to focus on the Middle Ottawa River with 100 volunteers. Clean Your Streams Day kept expanding and the fourth Kickoff was added for eastern tributaries of Maumee Bay. 2004 was a landmark for Clean Your Streams Day. In that year over 10,000 pounds of trash were removed from the AOC. 2005 brought the inclusion of Olander Park as a Kickoff Location, with 123 volunteers there for their first year. International Park was started as an Eagle Scout project by a high school rower tired of seeing all the trash floating in the river (and he is our website & newsletter guru still today!) and the University of Toledo was added in 2008 (the year it rained, the whole time…). By 2012 there were 425 volunteers at the University of Toledo alone. In that year, 22 more sites were cleaned than in 2011. 2015 Clean Your Streams Day hit the mile marker of more than 10,000 CYS volunteers since 1997!

Rainy days did not dampen the results of the 20th Anniversary of Clean Your Streams Day, and by this time a core group of planning team partners had become a well-oiled machine! In 2018, a record number of marine debris was removed – over 35,000 pounds. By now, volunteers had come across almost everything imaginable – film negatives, antique sewing machines, couches, safes, an ATM, water heater, prom dress, pipe organ, plastic pickle, blender, e-scooter, and much, much more. By 2020, even Covid could not deter Clean Your Streams Day. Partners for Clean Streams began a remote, clean-on-you-own option to encourage volunteers to choose their favorite or nearby spot to clean up during the week leading up to CYS Day. 431 volunteers safely removed 16,957 pounds of marine debris, covering areas we had not ventured before, such as the shore of Lake Erie in Sterling State Park!

The 25th Anniversary, like the 20th Anniversary, saw a rainy anniversary. Still, volunteers came out in the hundreds to help improve the aesthetics of the Maumee River, Swan Creek, Ottawa River, Grassy Creek, many other ditches and creeks, and ultimately, Lake Erie.

Starting in 2007, Clean Your Streams Day was organized under the stand-alone non-profit, Partners for Clean Streams; and is still organized by Partners for Clean Streams today to help the BUI and many other marine debris programs in the Great Lakes. It is grown beyond focusing on the AOC to go upstream or to other rivers as needed.  To date 368,611 pounds of aesthetically harming trash have been removed from Northwest Ohio, in and out of the Area of Concern. All because volunteers want to make a difference and our partners have been committed to continuing the tradition that a small group of people started back in 1997. While a few of us are still involved today, we look forward to the tradition continuing with future generations of stream cleaners as well!

The Maumee AOC Advisory Committee (MAAC) has been seeking feedback on design feature ideas intended to protect and enhance habitat at several island areas in the Maumee River. The group hosted an Open House outside at Walbridge Park and made presentations or had discussions with numerous other interested groups this fall.

These design ideas are part of a feasibility study underway to identify opportunities in the Maumee River where habitat for fish and benthos (small organisms that live on the river bottom) could be improved. Island habitat in the Maumee River is particularly important to fish and benthos. The island areas being considered for improvements are Audubon-Ewing Island Complex (owned by Metroparks Toledo), Marengo Island (owned by Metroparks Toledo), and the Delaware-Horseshoe Island Complex (owned by the City of Toledo).

Preliminary design and feasibility work is being performed under the direction of the MAAC and is being led by the U.S. Army Corps of Engineers. Other team members include the U.S. Geological Survey, Ohio EPA, ODNR, Partners for Clean Streams, The University of Toledo, and Hull & Associates, LLC. Project partners are the City of Toledo and Metroparks Toledo. This study is funded through the Great Lakes Restoration Initiative.

For more information on these conceptual ideas, please call or email Jenny Carter-Cornell, APR, (567) 200-4355 or This email address is being protected from spambots. You need JavaScript enabled to view it.. 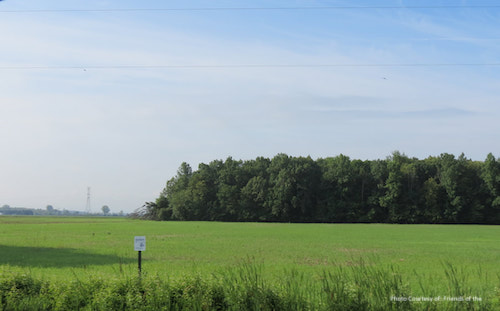 Fox Unit Property project adds to the network of complex ecosystems that provides critical wildlife habitat near Ottawa National Wildlife Refuge to enhance the coastal wetland corridor.  This 40-acre project is located directly across State Route 2 from the Ottawa National Wildlife Refuge Visitor Center. The property includes an 8-acre woodlot, which was maintained and enhanced and is the first project for the Friends of the ONWR group.

This project increases critical wildlife habitat around the shores of Lake Erie.

In 2020, the Fox Unit property was seeded with moist meadow and woodland sedge. This April the Fox Unit Property received a prescribed burn to facilitate the restoration process. An aerial video of the burn can be found here https://youtu.be/b5Pbqh4AYz4. The project is scheduled to be completed by December 2021.

After 20 years of ex 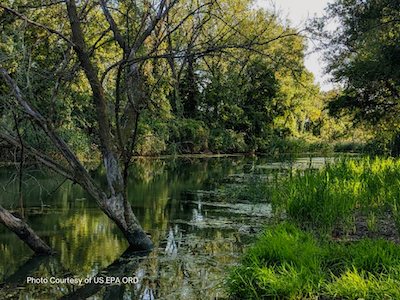 tensive investigations of Otter Creek sediment, stream conditions, and ecological conditions, we are excited to share that the Otter Creek Project started last month. This project aims to reduce potential harm from exposure to chemicals accumulated in the sediment by reducing PAH and DRO exposure to organisms and ultimately redu
cing associated toxicity. This project will remove 1.7 miles of contaminated sediments in the Lower Otter Creek and mouth of Otter Creek into Maumee Bay. Approximately 57,000 cubic yards of contaminated will be pumped into the Toledo-Lucas County Port Authority confined disposal facility, where it will remain indefinitely.

A one-foot sand cover mixed with organic material will be placed in the creek after dredging to provide a barrier to any remaining residuals and a new surface for organisms to re-establish their populations. Some new habitat structures will also be placed along the lower mile of Otter Creek.

Check out our social media to see the project updates and videos from lead agencies.

We are excited to announce a new page featuring the sediment contamination projects within the Maumee AOC website. This section on the website will highlight BUI 6 (Degradation of Benthos). The projects to be highlighted will be the Lower Maumee River Sway Bridge (near old Chevron), Otter Creek, and Swan Creek, along with the previously completed Ottawa River sediment removal project.