In 1987, the Maumee Area of Concern was established following ordinances of the Great Lakes Water Quality Agreement. The US EPA and Ohio EPA determined the course of action necessary to improve water quality within the Maumee AOC. The Maumee RAP (Remedial Action Plan) Committee was thus formed through a collaborative effort between government agencies, businesses, citizens, and universities interested in addressing water quality issues within this area. Today, the committee has been reformed and renamed as the Maumee AOC Advisory Committee (MAAC) to improve the Beneficial Use Impairments (BUIs) of the AOC. This committee meets every other month to discuss problems, programs, and potential solutions to address the delisting of 9 BUIs the Maumee AOC program has been tasked with removing. Partners for Clean Streams serves as the facilitating organization for MAAC. If you are interested in improving water quality and ensuring fishable and swimmable water, be sure to attend the next MAAC meeting, which will be held in April and announced on http://www.MaumeeAOC.org.

MAAC Summit: Moved to the Summer

The annual Summit, usually held in December, will be re-invented as a field tour in the warmer months. This will allow the MAAC to showcase the many active or recently completed restoration projects going on in the Area of Concern. And who doesn’t like to get out of the office, too?

On Saturday, September 23rd, over 900 volunteers joined forces to clean the waterways of Northwest Ohio. Together, they removed over 23,000 pounds of trash, litter, and marine debris at 69 different sites. The volunteers covered 25.57 miles of riverbank, impacting the Swan Creek, Ottawa River, Maumee Bay tributaries, Maumee River, and several small watersheds. 94 tires were removed from these riparian areas, which were then collected and recycled through Bridgestone’s Tires4Ward program. Volunteers for the cleanup completed data cards at each site that detailed what kinds of marine debris and how much were removed. These findings were tabulated and inputted into the International Coastal Conservancy’s TIDES database for 2017.

Clean Your Streams Day has a huge impact on Maumee AOC’s Beneficial Use Impairments (BUI). Specifically, BUI 11 (Degradation of Aesthetics) is significantly improved through these efforts. At many of the cleanup sites, trash and debris had littered the riverbanks. By removing the waste before it travels to the waterways of Northwest Ohio, or further downstream to Lake Erie, Clean Your Streams Day enhances the aesthetics of these areas and prevents potential pollutants. The sheer amount of trash picked up beautifies the parks and riparian areas and fosters stewardship of this natural resource among citizen volunteers. 99% of volunteers felt that they had a positive impact on their waterways and the aesthetic condition was undoubtedly improved.

Thank you to our Clean Your Streams 21 Volunteers! 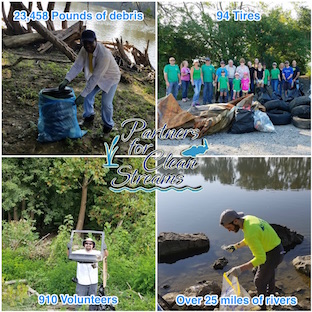 On Saturday, September 23rd, we had the 21st Annual Clean Your Streams Day across northwest Ohio.  It was a great, sunny day of cleaning up our rivers and streams followed by an appreciation picnic for all volunteers.  A big thank you to the 910 volunteers who participated!  Overall, they cleaned at 69 sites (and one water site) totaling over 25 miles.  23,789 pounds of trash and debris was removed from our community's waterways, including 94 tires.  Thank you for all your hard work in helping to keep our streams clean!

Delving Deeper into the Status of the BUIs

The Maumee AOC Advisory Committee recently formed numerous BUI-specific teams to examine the status of the Beneficial Use Impairments (BUIs) in a step-wise process. Teams have been busy meeting all summer and are working on delving deeper into data, the status of the BUI in the Maumee AOC, and what projects need to be implemented to make progress specific to fish habitat, terrestrial habitat, macro-invertebrates, fish diversity and abundance, & other indices of health of the waterways. The BUIs use Ohio’s specific indices and data to measure progress within the Beneficial Use Impairments and in such a geographically large and diverse Area of Concern the conditions of the waterways, terrestrial habitat, and wildlife can vary greatly from watershed to watershed. Teams will update the full committee in August and eventually make recommendations to the full committee on identified studies and/or projects necessary to improve each BUI by using the metrics it is measured against.