In September 2016, TMACOG, with support from Partners for Clean Streams, the Lake Erie Protection Fund, and the MAAC, completed the Hoag Street Rain Garden project. The purpose of the project was to demonstrate the feasibility and benefits of repurposing urban areas into green stormwater features, like rain gardens.  The rain garden has reduced the amount of water entering the nearby combined sewer system and serves as a holding facility to treat runoff from the surrounding urban area. To see pictures of before, during, and after construction of the rain garden, click here. It was also deemed important that the community members near the project area, known as Junction Coalition, be included in the decision-making processes for the project. They helped select the project site and provided ideas for the types of plants and other features that the rain garden would have.

Partners for Clean Streams is the fiscal agent for a small pot of money to support beneficial projects in the Maumee Area of Concern. In years past, when a business was cited by the Ohio EPA or the City of Toledo for violating some environmental rules, the business could negotiate putting money into a Supplemental Environmental Project (SEP) instead of only fines. These funds were held in a separate account, often with specific rules for how they could be spent. Partners for Clean Streams worked to find projects that would benefit the area and meet the criteria outlined in the SEPs. In 2015, PCS worked with Ohio EPA and the Maumee AOC Advisory Committee to issue a small request for proposals. By combining some of the smaller SEP funds into larger chunks with common goals and requirements, PCS, with input from the MAAC, was able to fund this rain garden project led by TMACOG for nearly $10,000 (which was part of the funding needed for the project).  Not only has the Hoag Street Rain Garden project improved the aesthetics of a vacant lot, it also serves as an example of successful green infrastructure for community members and city officials. Most importantly, the rain garden is functional in improving the quality of water leaving the site and entering the larger system that eventually leads to Lake Erie. 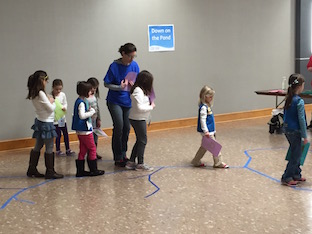 One week left to register for Partners for Clean Stream's 15th Annual Youth Patch Day Workshop! The Workshop is on Sunday, March 5th 2017 from 1:30-4:30pm for children Kindergarten through 5th grade.  The cost is $5.00.  It will be held at the University of Toledo Student Union in the Ingman Room (#2520).  Check-in begins at 1:00pm with the program starting promptly at 1:30pm. Pre-registration is required by February 22nd! The Workshop is perfect for any child who loves water and wants to learn more about our local rivers, streams, and lakes. Patch Day offers youth the opportunity to explore exciting water conservation-related topics and learn how to make a difference in protecting our local waterways. Participants can fulfill requirements for various environmental merit badges or patch requirements. Among the usual hands-on activities on the water cycle, watersheds, and our local rivers, this year’s participants will also get to paint rain barrels as a part of the Toledo Rain Garden Initiative’s 10th Anniversary celebration! Flyers and registration forms are available in the Boy Scout and Girl Scout offices, or online on the MAAC website. We hope to see you at Patch Day! Contact the PCS office with questions and to register at (419) 874-0727.

Partners for Clean Streams, the MAAC’s facilitating organization, is currently seeking applications for MAAC membership for the 2017-2018 year. Memberships can either be voting or non-voting. Voting members must submit an application and serve two-year terms while non-voting members are appointed on an annual basis and do not need to submit a formal application. The deadline to apply to be a voting member is midnight on December 11th. For more information and to download the application, please go to our website. Questions? Please call Partners for Clean Streams at (419) 874-0727.

Mark your calendars for Thursday, December 8th, as the Maumee AOC Advisory Committee (MAAC) will be hosting their Annual Maumee AOC Summit from 9:30am to 12:30pm at the Ohio EPA Northwest District Office in Bowling Green, OH.  Throughout the morning, the Committee will discuss the current status of the Maumee AOC and the work being done towards delisting the remaining impairments. The agenda is also available for review prior to the meeting. The Summit is a great opportunity for interested members of the community to listen, learn, and share their thoughts with the Committee. Questions? Please call Partners for Clean Streams at (419) 874-0727.